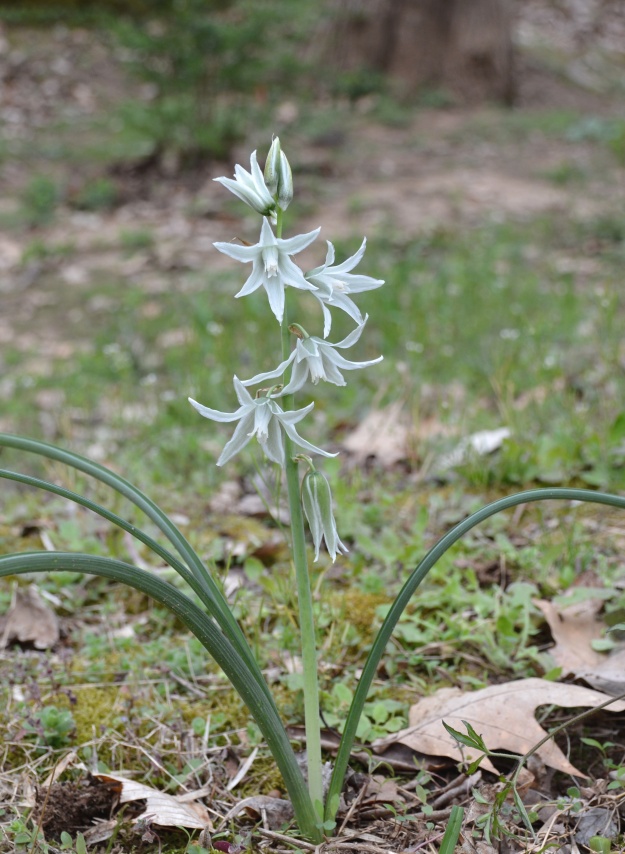 Nodding Star-of-Bethlehem (Ornithogalum nutans) is a perennial bulb native to the Balkan regions of Europe and Turkey which features white bell-shaped perianth flowers with six green and grey striped tepals. Although it is quite beautiful and has even won the Award of Garden Merit from the Royal Horticultural Society in the UK, it is considered an invasive species in parts of the Eastern US, especially in Maryland and surrounding states where it has out-competed many native forest species. Here it is shown in my woodland garden, in the floodplain of the Reedy River.

Yesterday I headed to Lake Conestee Nature Park, only a few miles from my home, to get a look at an invasive plant discovered in SC only weeks ago. Ficaria verna, commonly called fig buttercup, was found by a birder on an outing along a new section of the Swamp Rabbit Trail. The detection was a lucky break and efforts are now underway to search surrounding areas, map infestations using GPS coordinates, and attempt safe irradication.

Surprisingly, I had seen this plant before. It was once given to me as marsh-marigold (Caltha palustris), a seldom-seen native plant that grows in similar conditions. For a comparison of the two, go here.

I took photos to aid identification, but plants were no longer in bloom. Flowers can be seen on the link above. A notice from the SC Native Plant Society, with more facts, follows my photos. If you find fig buttercup on public property, such as a park or preserve, please report the infestation to the property manager or managing agency.

Tuber-like roots and underside of leaves, pale and deeply veined, are distinctive.

Bulblets are found on the crown…

and also on runners.

Information below is taken from Upstate Happenings, newsletter of the Upstate Chapter of the SC Native Plant Society:

Fig buttercup has just been discovered in Greenville County. Never heard of it? Try Lesser Celadine. It might be in the gardening catalog on your kitchen table.

This is the first sighting of Ficaria verna growing outside of cultivation in SC. It is a vigorous plant that emerges in early spring before most natives, forming a green blanket which, once established, native plants cannot penetrate. Toothworts, Dutchman’s Breeches, Trout Lily, Trillium, and Bloodroot are some of the natives most at risk. Fig buttercup produces numerous tubers and bulblets, each of which can grow into a new plant when separated from the parent by animals, well-meaning weed-pullers, or rushing water.

Its bright buttery yellow flowers bloomed in April this year. Infestations are typically found in open woods, floodplains, meadows, and waste places. After flowering, its above-ground parts die back and are mostly gone by June; it survives the winter as thickened fingerlike underground stems.

Fig buttercup is a very serious and challenging pest and it is important we do everything we can to prevent it from establishing a beachhead. Its short life cycle offers very little time to attempt control. Chemical pesticides can be effective, but are best used early before natives and amphibians have emerged. Small infestations can be tackled by hand digging with a small trowel, but soil disturbance can encourage further infestation. If digging is attempted, care must be taken to bag every scrap of plant and to ensure the material is no longer viable before disposal.