After spending nine mid-January days in Washington, DC, I was thrilled to arrive home early last week to find blooms, inside and out, including the first flower on a Hippeastrum I ordered just before Christmas. I chose ‘Blossom Peacock’ from Brent and Becky’s online catalog because it was described as Brent’s favorite for its incredible symmetry, color, and mildly sweet fragrance. Now, I think it’s my favorite too. 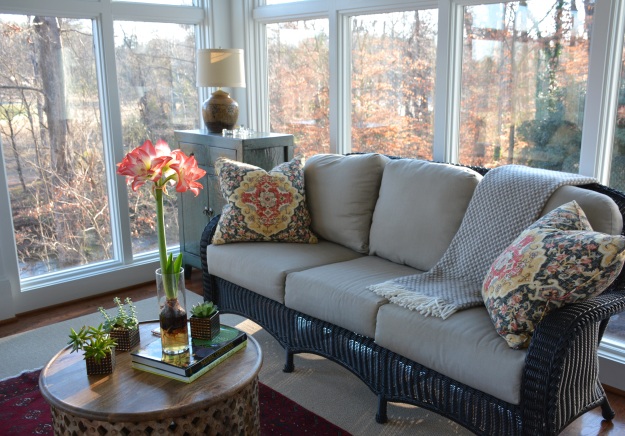 As soon as the bulb arrived, I “planted” it in a container of pebbles, but as the flowers opened and the top-heavy stalk tilted one way and another, and I worried I might have to cut its stem before finding it could be squeezed, bulb and all, into an upright glass vase. Moved from the kitchen window to the sunporch, where it shines each morning in the early light, I can barely take my eyes off it.

Today, it’s perfect for In a Vase on Monday, hosted by Cathy at Rambling in the Garden.

The first warm welcome home, however, was hailed by ‘Peggy Clarke’, a Japanese flowering apricot (Prunus mume), which I spied even before turning into the driveway.

Although the small tree’s common name would lead you to believe it’s native to Japan, where it was first found in cultivation by Europeans, it’s actually indigenous to China and Korea. In China, the plant is commonly called mei, or plum, and it’s known as one of the three friends of winter along with pine and bamboo.

Like others of its kind, ‘Peggy Clarke’ blooms January to March when the weather is mild. Its 1-inch wide, rosy-pink, double flowers, each accented with a red calyx and many long, thread-like stamens, perfume the garden with a spicy-sweet fragrance. Today, which is rather warm for the season, the tree is buzzing with a variety of bees and other insects in search of nectar and pollen. Some buds, however, are still tightly closed, waiting for winter’s next warm spell. 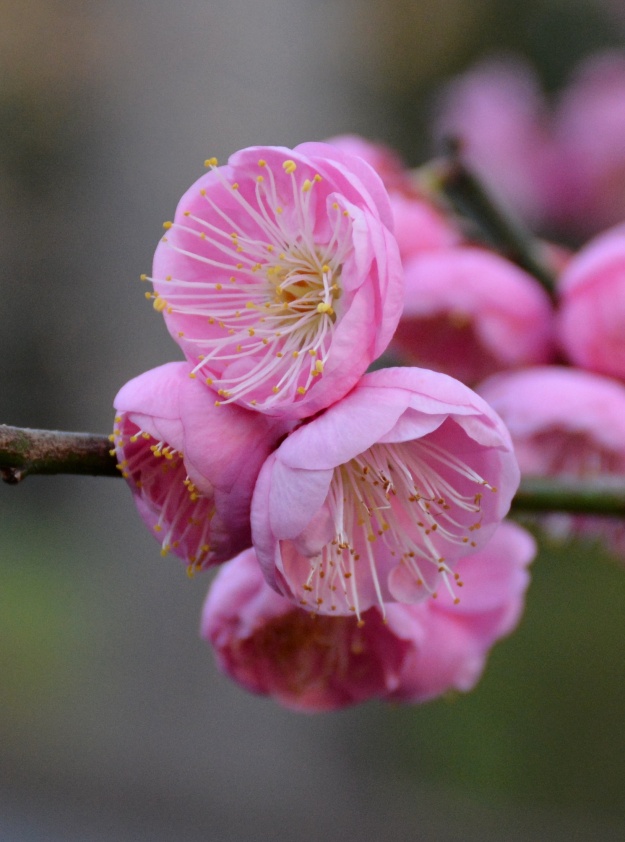 Edgeworthia chrysantha (so hard to photograph!) with it’s bell-like clusters of flowers just beginning to open. 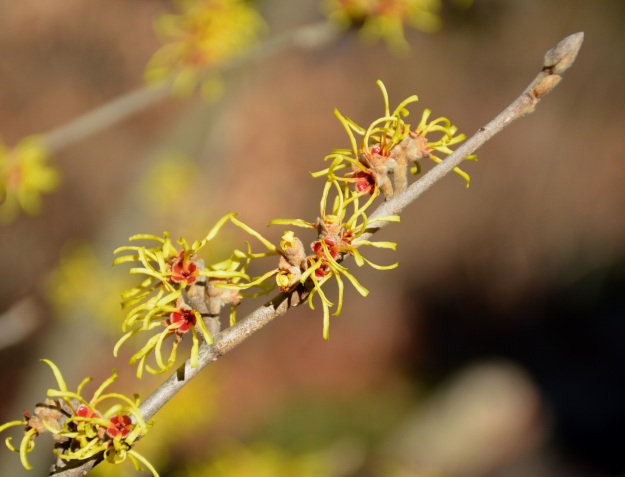 In the week that followed, I was glad to have these cheerful friends as I was caught off guard by a debilitating cold while struggling with a full schedule of meetings, appointments, and work. Then, when the weekend arrived, I don’t know that I’ve ever been so happy to enjoy a quiet Saturday and Sunday.

Now, it’s time to be up and at ’em again, and I’m excited to see a week of fine weather ahead. Fingers crossed for an afternoon or two in the garden.

For those hoping to hear a little about the Women’s March on Washington, I’m happy to share. It was an amazing event, though I was sad to see later (on television) that much of the rhetoric from the rally was not representative. Madonna….really? I don’t think 1 in 10,000 would say she speaks for them.  Certainly I wouldn’t.

It was a great crowd, very friendly, patient, and upbeat, and lots you didn’t see in the
media. Varied ethnic and religious groups participated, as well as disabled persons. There were lots of young families with children, many mother and daughter pairs, and an astounding number of young people under 30, including young men.

All in all, it was a positive and hopeful experience. The March on Washington might not make an immediate impact on policy, but I believe it will make all the difference for those engaging in human rights for the first time.

34 thoughts on “IAVOM and More”